Credit card with a free annual fee for the first year and a high return rate for Costco members! You can get rewards for usage at Costco stores and other usual shopping. The reward rate for shopping at Costco stores is 1.5%.
There are a plenty of ancillary services such as automatic withdrawal of the annual fee and overseas and domestic travel accident insurances. We're running new member campaigns!

Application for the card

For application, the Costco membership number of the person who applies for the credit card (11 digits excluding 0 at the top) is required. 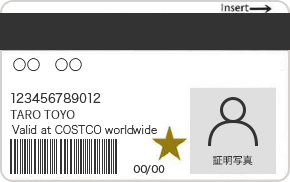 If you have no membership number

If you have a membership number

Application for the card

Click here for the rewards of the executive membership

Click here for the rewards of Costco Global Card